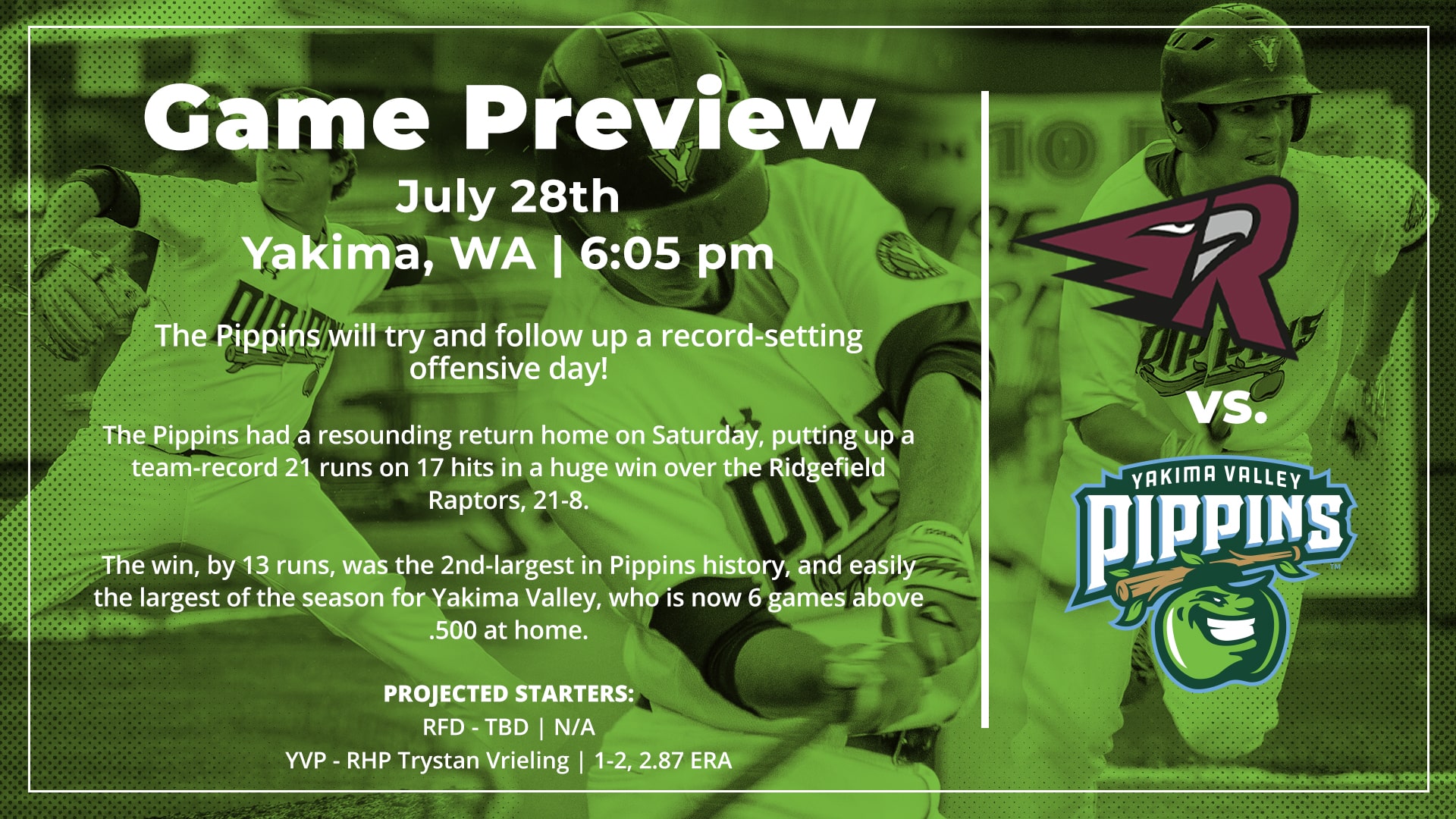 After opening up a three-game series with the Ridgefield Raptors with a record-setting offensive day on Saturday (21 runs on 17 hits), the Pippins continue the series on Sunday, looking to clinch the three-game set. First pitch for a Sunday matinee is set for 6:05 PM PT, with pregame coverage at pippinsbaseball.com/live beginning at 5:50 PM. The Pippins will start right-hander Trystan Vrieling against a to-be-determined starter for Ridgefield.

PIPPINS EXPLODE ON OFFENSE TO OPEN SERIES WITH WIN: After mustering a total of one run on six hits over their last 18 innings of baseball, the Pippins broke things open on Saturday, putting up a team-record 21 runs on 17 hits to pound the Ridgefield Raptors in the series opener, 21-8. The Pippins had four different innings in which they scored four or more runs, and had five extra-base hits on the day. It was the second game for the Pippins in the past week in which they have had at least 15 hits and scored in double digit runs. Eddy Pelc led the way on offense for the Pippins, reaching base in all 7 of his at-bats, including a season-high five walks and a three-run homers, his first of the year. On the day, the Pippins had five different players with multi-hit games, and five different players collect multi-RBI games. Mark Woinarowicz earned the win on the mound for the Pippins, his fourth of the year, despite allwoing six runs over 3.2 innings of relief. Dominic Miller was impressive in two shutout innings of work to close things out for the Pippins in the win.

FOR THE PIPPINS: Right-hander Trystan Vrieling will make his third start of the summer on Sunday in against Ridgefield. The 6-foot-3, 180-pound righty native to Kennewick, WA, is 1-2 on the season with a 2.87 ERA after picking up the win in his last start on Sunday in Victoria. In that start, the Gonzaga incoming freshman allowed just two earned runs over 5.1 innings of work, striking out 6, walking 4, and allowing four hits. In 15.2 innings of work this season, Vrieling has struck out 18 and walked 7, while opponents hit just .242 off of him.

FOR THE RAPTORS: Ridgefield has not announced a projected starter for Sunday’s game.

RECORD RUN SCORING: With their 21 runs on Saturday, the Pippins set a team record, shattering the previous high mark of 16. That total was set on June 7, 2015, in a 16-2 win over Klamath Falls. The 14-run margin of victory in that game still holds as the largest in team history, with the 13-run win on Saturday clocking in as the second-largest win in team history. It was, however, the first time all season that the Pippins have won a game by double-digit runs.

PELC POPS OFF: Outfielder Eddy Pelc had the best game of his short Pippins career on Saturday, reaching base in all 7 of his trips to the plate and collecting his first homer of the season, a 3-run shot to right field in the 3rd inning. Pelc drew a season-high five walks yesterday, increasing his season total to 17 walks in 15 games, a mark that leads all Pippins players. Pelc raised his on-base percentage 81 points on Saturday, from .500 to .581, a mark that leads the Pippins.

A RARE LONG BALL: Pelc’s third-inning, three-run homer marked just the second homer hit by the Pippins in the entire month of July, and their seventh home run total on the season (fewest in the West Coast League). The Pippins’ last home run came July 17, when Nick DiCarlo homered against Bend. Five of the Pippins’ seven home runs this season have come at home at Yakima County Stadium, with the two road homers coming against Ridgefield in the very first series of the season back on June 5 and 6. The two players who hit those road homers, Owen Cobb and Daniel Cipriano, have both since departed the team.

ODDS & ENDS: James Bell’s five-hit game was the first by a Pippins since Christian Koss had 5 hits on 6/16/2016…every player in the Pippins’ lineup scored at least one run Saturday, with Aidan Welch extending his scoring streak to five games, the most of any Pippin this season.